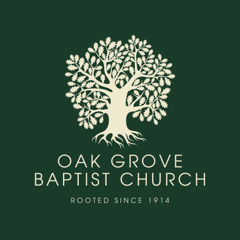 Oak Grove Baptist Church was established in 1914. A white framed church building with very high front steps was erected on land donated by Hillard Andrew Webb at what is now the junction of Old Jefferson Highway (LA 73) and the Port Vincent Highway (LA 42). This building served the congregation for some 40 years until a new sanctuary was built in 1953. Hillard's wife, Victoria White Webb named the church Oak Grove for the oak trees growing on the property and others located in the surrounding community.

Oak Grove sent a petitionary letter to the 73rd Session of the Eastern Louisiana District Baptist Association on October 15, 1915, after which a committee was appointed to examine the orthodoxy, etc., of this church and report on the same as soon as they are ready to do so. The committee, on examination of Oak Grove Church made a report recommending the reception of the church into full fellowship of the Association. The report was adopted, and the Moderator declared Oak Grove Baptist Church a member of the Association. E. D. Dixon, A. King, and I. L. Odom, the church's messengers at the Association meeting, were given the hand of fellowship, and seated as members of the body. A total of 102 members were reported in the 1916 minutes of the Eastern Louisiana District Association.

Robert L. Cook was the first pastor, who reportedly rode in on a motorcycle from Texas. He came to Oak Grove as a broken-hearted lover because his girlfriend had recently jilted him. Quickly recovering, Pastor Cook came to be loved by the people in both the church and in the community.

O. M. Corely came to the church in 1919 to serve as Oak Grove's second pastor. He served both the Oak Grove and Jones Creek churches, preaching at Oak Grove on the first and third Sundays and at Jones Creek on the second and fourth Sundays of each month. Pastor Corely was the only pastor to live in the church parsonage located on Old Jefferson Highway, which later became the home of Ned P. and Cora Webb King.

Dr. R. P. Mahon, a professor at the Baptist Bible Institute in New Orleans, came to Oak Grove as the third pastor in 1922.

At the 81st Session of the Eastern Louisiana District Association held on October 12-14, 1923, Dr. Mahon read a letter from Oak Grove and other churches in the territory of Ascension Parish asking for letter of dismission to organize a new association. The churches asking for and receiving letters dismission were: Oak Grove, Jones Creek, Gonzales, New River, Mt. Zion and Broussard Grove.

J. A. Herring, a student at the Baptist Bible Institute, came as Oak Grove's fourth pastor in 1931 when Dr. Mahon resigned after nine years of ministry. He served the third longest of any of the Oak Grove pastors.

C. G. Clark, another student at the Baptist Bible Institute, and former army chaplain, served as the fifth pastor from 1934-1935.

Dr. W. W. Hamilton, Jr., a professor at the Baptist Bible Institute served as the sixth pastor from 1935 until 1939 when he resigned to accept a new charge at the First Baptist Church of Gonzales.

W. B. Currie, a student at the Baptist Bible Institute, and a converted seaman, served as the seventh pastor for one year, between 1939 and 1940.

A. E. Tibbs, a professor at the Baptist Bible Institute, served as the eighth pastor from 1940 through 1943.

A. J. Roddy served as the ninth pastor for two years from 1943 through 1945, after which he went to the First Baptist Church of Dallas, Texas and to do missionary work among the deaf.

J. D. Wagnon, while a student at the newly named New Orleans Baptist Theological Seminary, formerly the Baptist Bible Institute, served as the tenth pastor coming to Oak Grove in 1946.

J. W. Trimble, another student at the New Orleans Baptist Theological Seminary, served as the eleventh pastor between the years of 1947 and 1949. He left the church to become a missionary in Lebanon. Trimble and former pastor Currie lived in a small apartment located in the basement of the church. Most of the other pastors usually traveled to Oak Grove from New Orleans on Sundays to deliver their sermons.

H. Clayton Waddell, professor at the New Orleans Baptist Theological Seminary, was called as Oak Grove's twelfth pastor in 1949. Dr. Waddell served the second longest pastor, resigning in 1966. His 16 years as pastor were interrupted only once for a sabbatical leave from the seminary. Dr. Riley Landry, a lay preacher, served in Dr. Waddell's position from November 1957 to August 1958.

Beginning with Dr. Waddell's pastorate, Oak Grove changed the number of times worship services would meet from two services, twice monthly, every other week, to every Sunday of the month. This practice continues.

The present church buildings were built during Dr. Waddell's pastorate. Prior to the building fund, which was established in 1950, one acre of land had been purchased behind the old church building to provide additional space for the cemetery. Land on which the present sanctuary stands was donated by Mrs. Cora Webb King. The current structure was designed by renowned Baton Rouge architect A. Hays Town, and constructed by J. Earl Vavasseur, at a cost of $25,000. The sanctuary seats around 200 people. Wood used for the altar and the ceiling is cypress obtained from a barn being torn down on the property of Hillard A. Webb.

Groundbreaking services were held on March 8, 1953. Construction began in August 1953. The new sanctuary building was completed in 1962. Central air conditioning was added in 1965.

The first unit of the church's educational building was completed and furnished in December 1960. The last unit of the educational building was completed in 1962. Much of the work for these projects was done by members of the church. In 1993, a second story was added to the existing fellowship hall. This addition included education and office space and an upgrade to the church kitchen. A separate building designated for youth ministry was built on the northeast corner of the property shortly after the addition to the fellowship hall. All of the buildings were paid for shortly after their completion.

Dr. Eugene M. Johnson served as interim pastor of Oak Grove Church from January to August 1966. Gene grew up attending Oak Grove. The son of Rupert and Esther Webb Johnson, Gene was called and ordained to the ministry while a member at Oak Grove.

C. B. (Lum) Ellis served as the thirteenth pastor from August 1966 to May 1970 while earning a Ph. D. in Sociology at L.S.U. Lum had served as pastor of New River Church when he was a student at the seminary in New Orleans. He was no stranger to the Ascension Association or to Oak Grove Church.

Donald A. Copeland, a student of Dr. Waddell's, came to Oak Grove as its fourteenth pastor in May of 1970. Don was the first pastor to live on the church field in a home provided by the church when he and his wife Evelyn moved from New Orleans in May of 1971. Don and Evelyn left Oak Grove in 1975 to serve as missionaries in Nigeria.

During the pastorate of Donald Copeland, Oak Grove hired its first music director. John E. "Gene" White served in that capacity from 1972 through 1990. Also serving for many years under Gene's direction, Lynn Knight faithfully offered her service as the church pianist and organist.

Kenneth and Jolly Faught arrived at Oak Grove in October 1976, and served until December, 1980. Prior to calling Kenneth Faught as pastor, the church had interim pastors - Dr. Taylor and Wayne Webb Cook.

John W. Carrigan, Jr. served as the sixteenth pastor of Oak Grove Baptist Church, having accepted the call in June 1981 until he retired in March 2022. John received his Master of Divinity degree from Golden Gate Baptist Theological Seminary in Mill Valley, CA in 1979. John has served the church longer than any other pastor in its over 100-year history. He and his wife Jo Ann reared their two children, Casey and John Carl in the church.